Miami is known for its zeal in historic preservation. From art deco to MiMo, we’ve always wanted our city to be a thriving expression of who we are. Despite our dedication to preserving the past, Miami looks a lot different now than it did a few generations ago.

Let’s look back in time at the heart of Miami and see how far we’ve come.

Historic Miami and the Present Day Washington Avenue has long been a central hub of our community. In the 20’s, the street was a part of the Miami Beach land boom, proving to be a convenient transit way and a great place for commerce in the early days. Miami has tried to put a trolley system in place multiple times over the last 100 years, as it would serve to help with congestion problems in the area. While most of the locations we are looking at have changed quite a bit over time, this intersection looks the same as it did decades ago. It features the North Miami High School Senior Arch, partially obscured by the tree. 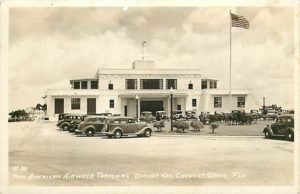 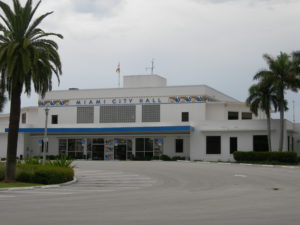 Pan American Airways was founded in 1927, providing mail and passenger service between Florida and Cuba. While Pan Am is no more, the terminal has been returned to service as the Miami City Hall. The Hotel Beverly Terrace (built in 1920) was torn down to expand operations for a wider Biscayne Boulevard. The location remains could soon get a resident. While any new structures will have to fit the historical feel of the neighborhood, current zoning would allow a building to go as high as 36 stories. Staying consistent with Miami’s theme, the Atlantic Gas Station, built in 1940, was designated as a historic place in 1988. While you won’t be getting gas or auto body work from there any longer, you can find a pretty darn good pizza at that location now. Victoria is the longest running private hospital in the area, beginning operations in 1924. As you might be able to tell from the photo, they have made a few changes and upgrades over the years, but they are right where they were when they opened up 92 years ago. In 1926, the Coral Gables Theater would have featured the new hit films like, The General (Buster Keaton) and The Scarlet Letter (Lillian Gish) — silent films displayed in a stunning 1.33:1 aspect ratio. The site now features newer businesses, such as the Wells Fargo Center, currently the fifth highest building in Florida. While the building that began as Morrison’s Pharmacy in the 1920’s is still there, this particular block of North Miami Avenue doesn’t have quite the same character anymore.

When Miami was first incorporated in 1896, officially there was only a few hundred people here. The Magic City grew rapidly, reaching nearly 30,000 by 1920, and then booming to more than half a million by the end of the second World War.

As a whole, Miami not only survived, but thrived to become a major international, cultural, and architectural marvel. The only question is, what are we building now that will be worth remembering 100 years from now?